Vaginal Arts Ensemble(Vͣͤæ̨͙̤̮͕̘ͮ̏ͭ) is a recently formed feminist collective consisting of two Athens and Berlin based artists. It is a synthesis of thoughts and actions about sexism, gendered, patriarchy and their projection on human temperaments. Moreover, the female genitalia has no distinctive form, a negative factor in a male dominated civilisation that “privileges phallomorphism”. VAE believes that the denaturation of this reflection must in particular become art.

In capitalist neoliberal societies where self-optimisation has become an unquestioned ideal the emancipatory feminist project has lead to barely more than adding female and queer work force to the labour market.Women are facing a twofold (or maybe more fold) burden of keeping up with so many contradictory completely internalised demands. Be good at everything. Be strong. Be feminine. Be emancipated. Be independent….while oppressed. Strangely these endless demands seem to accumulate nowhere as forcefully as in the public space.

Why is this the case?  You might find the digital dream of the genderless cyborg society realised in some paths down the internet but you surely won’t in the streets of Europe. There is a patriarchic distinction between public and private dimensions of human life, which corresponds to a distinction between reason, universality on the one hand and the body, affectivity, and desire on the other. Woman as being traditionally associated to the latter have been excluded from the public sphere for a long time and in fact they still are. You can often see it in the architecture of the city but mostly in the gazes and the behaviour against woman and queer folks employed to control, exclude and suppress gender and sexual difference preserving traditional patriarchal and heterosexist power structures. Every person who ever felt vulnerable and totally reduced to their body by a glance knows this feeling. The tough look an some feminine faces tells you the story of defence mechanisms many need to handle their anxiety in the public space. They take a walk with the feminist devil inside their heads. But it’s an ambiguous little creature. It claims to protect you from being harassed and to a certain degree it does, but it takes away all your faith and makes every glance and every touch of others hostile. It may take over and leave you stone-hard and bitter.

”Does the female form make you uncomfortable? Our art has been commended as being strongly vaginal which bothers some men. The word itself makes them uncomfortable. Vagina. Please, make yourself comfortable while we introduce ourselves.”

Our intentions are to take a walk the feminist devil inside us. We want to critically examine an introverted expansion. An ensemble of conscious or unconscious moves made spontaneously but also necessarily are about to be revealed through our workshops, texts and human installations. Our hard-copied zines content a small amount of concrete concepts, a collection of nude behaviours and visual poetry. Our workshops and performances have taken part to lots of different places in Athens and Berlin. The human body as performing subject binds the political with the theatrical, unveils private and public spaces, transgresses race and gender, and might even be the medium to overcome the contradiction between art and life. 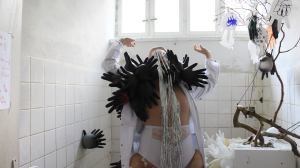